Do you know why Ayodhya is a famous tourist destination?  It is a popular destination as Rama’s birthplace, and long years back Ram mandir was constructed in honor of Lord Rama. Ayodhya is one of the seven sacred cities of the Hindus of our country. Now Ayodhya is all set to become a major tourist destination on India’s map. Indian Railways are ready to renovate the town’s railway station so that they able to accommodate the passenger traffic of one lakh passengers per day. This plan will make Ayodhya the biggest railway station in the state of Uttar Pradesh. 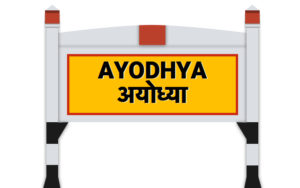 It is really important to make our history stronger, so before knowing about the present Ayodhya railway station, let’s know a little about this beautiful Ayodhya city. According to the theory, Ayodhya is a mythical city. The elder Kush took over the mantle and ruled Ayodhya for years. Other monuments including a stupa reputed to have been founded by the Mauryan emperor Ashoka. The Kanauj kingdom arose in Ayodhya during the 11th and 12th centuries.

We know load Rama was born on the ninth day of the lunar month Chaitra that day is celebrated across India as Ram Navami. It is more than 230 years after the construction of Babri Masjid in Ayodhya, the first recorded incident of religious violence took place in 1853. During the time of Nawab Wajid Shah of Awadh, Nirmohis claimed that a Hindu temple had been destroyed to build the mosque. At the moment Ram Mandir is an under-construction Hindu temple in Ayodhya but it will be ready by the year 2024. Many Hindus believe Ayodhya to be the birthplace of the Hindu god Rama. 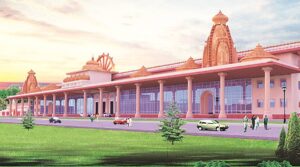 According to the news report, the development of the railway station will start in two parts. The first phase of the Ayodhya railway station will work on a double-storeyed building, circulating area, dormitory, sick rooms, two-foot over bridges, food court, escalators, elevators, air-conditioned retiring rooms, LED billboards, furnished rooms for railway staff, and other amenities for the passengers. This first phase of the railway station is proposed to end by June 2021. The second phase would be constructing a large waiting and parking zone for pilgrims. The second phase is said to handle one lakh passengers daily. The railway station will be a dome in shape having a similar structure to Ram Janmabhoomi Temple. A news report says that Faizabad station will be renamed as Ayodhya Cantt railway station. If you travel by train then this is the best station to get down and explore the city. While booking your train tickets same time remember to book your meal. How to book food in train using a mobile phone, just download Traveler Food app to get food delivered at your seat.

Ayodhya airport has got a 500 crore boost from the U.P government.  An international airport in Ayodhya, close to the railway station will be constructed and will be ready soon. Also, there will be a ropeway connecting the railway station, bus stand, and airport to the Ram Mandir. The Rope-Bus will accommodate 20 to 25 passengers at one time. Ropeways are a cost-effective alternative to metro projects or flyovers. Also, do you know Ram Mandir gets a 4-Feet tall bell weighing 613 Kg from Tamil Nadu? If you have planned to explore Ayodhya, always plan to travel by train to have a comfortable journey.

Places to visit in Ayodhya:

Ram Janmabhoomi: The Ram Janmabhoomi is the present Ram mandir where the famous Babri Masjid once stood. It is said that the Mughals demolished a Hindu shrine to build their mosque at the birthplace of Lord Ram. In 2019, five judges of the Supreme Court ordered the land to be handed over to a trust to build the Ram Temple. An alternate 5 acres of land was also given to the Sunni Waqf board to build a mosque for them.

Hanuman Garhi: This temple is located in Sai Nagar, it is a 10-century temple dedicated to the god Hanuman. It is one of the most important temples in Ayodhya, before visiting the Ram Temple in Ayodhya. It is believed that Lord Hanuman lived at the temple site guarding Ayodhya city. The hilltop temple hones a 76-staircase pathway to the entrance of the temple. 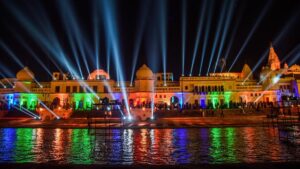 There are many food in train app available but which app for food on train do you consider while booking your meals?  If you are planning to travel by train make sure your take complete protection, wear a mask and keep sanitizing your hands. So if you are planning to travel, do consider Traveller food for train food services at your seat. Just you need to enter your PNR number and get your food at your berth. Traveler Food serves pure veg food in train, fresh food in train all over India. It is one of the well-known food provider in train maintaining complete safety in delivering food to their passengers across all stations in India. You can either pay online or cash on delivery to order your food. With our customer care help, you can order your delicious foods; dial 91-7827998877. We are ready to serve you.