The famous double-decker train Anand Vihar Lucknow express is back

Did you hear it? Yes, listen to the good news that Traveler Food has to offer to you. Lucknow-Delhi double-decker train service started its journey on 10 May 2022. Every passing day Indian Railways are showing us magic and bringing innovation to our country. Indian Railways Double Decker trains are two-floor express trains with spacious and bi-passenger seating configurations. However, these twin deck trains have more ample space than conventional coaches and also can carry more passengers.

In India, the train journey is the most engaging and thrilling experience as we Indian love to travel by train always.

Railways in India are the Transport Lifeline of the Country. Since the beginning of technology, Indian railways have devised their services and have remembered to comfort their passengers. Since railways are the most inexpensive mode of transportation, thus we find a heavy rush on ticket booking counters. But still, it has fun and charm on its own. Now railways have started the service of Double Decker Trains on specific routes to handle the rush of passengers.  Indian Railways employ fully Air-conditioned Double Decker trains.

Do you know that the first double Decker train in India was flagged off in October 2011? It had the route between Howrah and Dhanbad. However, today we are proud of Indian Railways to start back again Anand Vihar double-decker train back on tracks. It is a lifesaver for so many normal people like us.

Today we will know in this blog about the Anand Vihar double-decker and also 10 other ac double-deckers that are running on various routes in India. 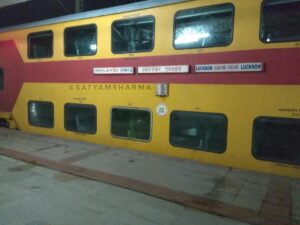 Yes, you have heard it correctly. This train is back on track again.  For the comfort and amenity of passengers traveling between Delhi and Lucknow, Indian Railways has chosen to run a double-decker train service back again. The decision was taken by the Railway Board for the public. The train remained off the track for the last 2 years. After remaining off the track for the past two years due to the pandemic, this double-decker train service started on 10th May The decision was taken by the Railway Board which has also opened booking for the public. The train will run four days—Tuesday, Thursday, Friday, and Sunday—a week. Here is train Number 12583 Lucknow – Anand Vihar Terminal Double Decker and Train Number 12584 Anand Vihar Terminal – Lucknow Double Decker, which will run four days a week, isn’t it that good news for us.   However, whether it’s a double-decker train or single Traveler food is always next to you with train food services India.

The train first started on December 19, 2015, and runs three days a week. The train starts its journey from Lokmanya Tilak Terminal and runs to its final destination by covering 565 km.

Mumbai Central-Ahmedabad Double Decker Express began to commute the travelers from Mumbai to Ahmedabad in a very short time. Ahmedabad is also popular as a business hub in India and the train began to provide its service six days a week. However, business travelers mostly prefer to board this train as it takes 7 hours to reach Ahmedabad.

This double-decker train links the two major cities of South India – Chennai and Bangalore. These two Mero cities are the giant business locations in India. As a result, business working people board the train to save the time journey. This train helps people to commute easily. The train has 10 coaches and the train is fully air conditioner.

This Double Decker Express train of Indian Railways is a luxurious train that runs between Bhopal and Indore. It delivers service to the passengers seven days a week. This is an interstate double-decker train. However, have you tried Traveler food? They do food delivery in train. You should definitely try once.

The train runs between Jaipur to Delhi. Jaipur is one of India’s most visited tourist places that tempt people across the globe.  Indian Railways runs a budget-friendly Jaipur –Delhi Sarai Rohilla AC Double Decker train that helps travelers back to Delhi. It covers a distance of 303 km and takes the time of 4 hours and 30 minutes.

This is the first Non-AC Double Decker Express train that runs between Mumbai and Surat. The train has a pantry car was attached to it also and runs seven days a week.

This train serves the Southern zone of Indian Railways. The train operates three days a week, and it started its service on December 31, 2016. This train is beneficial for pilgrimage visitors who come to Tirupati Temple from all across India and World.

It is a fully luxury double Decker train that serves the routes between Vishakhapatnam and Vijayawada and is also thought the second most luxurious double Decker express train of Indian Railways. The train has the capacity of 120 seats per coach, with 50 passengers on the upper deck and 48 on the lower deck. The train always runs on time and arrives at its destination.

The train started its service on October 1, 2011, covering 259 km of distance. It is the first double-decker train that runs between Howrah in West Bengal to Dhanbad in Jharkhand. With its launch, do you know that India became the third country to use double-decker trains after USA and United Kingdom?

If you are traveling on a train and if you miss out on train food that means you are missing out on something interesting part of life. Don’t worry as Traveler Food is here to serve you in a better way. We serve you directly on your berth seat the food you love to eat. Just press the click button and we are here to help you out. We not only deliver food, but sometimes we maintain hygiene and do proper packaging that helps our customers to eat food without any hustle. Our travelers can book a meal on wheels through our e-catering services by visiting our website or directly calling us on 7827998877. You can order varieties of food, such as veg, non-veg, Chinese, Italian, South Indian, and North Indian Delicacies as per your taste and mood. Anywhere and everywhere food delivery at the railway station is possible with Traveler Food.

Hope to see your order next.

Northeast to Rajasthan in Train – What to eat an...