Jainism is an ancient Indian religion, which takes as its central tenet the well-being of the universe and all living beings within it. Jainism aims to achieve the liberation of the soul, which Jains believe can be achieved through a life devoted to non-violence and the rejection of possessions.

Jain Dharma is one of the most ancient religious traditions of the Indian subcontinent with its origin rooted in prehistoric times. Although it is now reduced to a minority religion in India and elsewhere, there was a time when it dominated most parts of India and enjoyed patronage from some of the most prominent rulers of ancient India. Chandragupta Maurya, the first well-known emperor of India, became a follower of Jainism in the last phase of his reign and ended his life by fasting in the true tradition of a Jain monk.

Although it yielded place to Brahmanism and Buddhism, Jainism left an indelible impression on the canvass of Indian religious life. There is no exaggeration in saying that it was not Buddhism but Jainism which lives in the core of Hinduism in the form of some vital concepts and practices that are too difficult to ignore. According to Jain beliefs, its doctrine is ancient and eternal which is passed on to humanity in each time cycle and becomes lost over some time and reappears again through the teachings of purified and enlightened beings known as ‘Thirthankaras’. 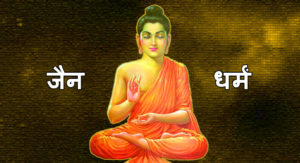 A Tirthankara is a guide to the dharma or righteous path. According to Jain texts, Rishabhanatha also known as Adinatha, was the first in line of 24 Tirthankaras who is credited with the teachings of first professions of writing, agriculture, knowledge, trade, crafts, and swordsmanship (solely for defense). Parshvanatha and Vardhaman Mahavira were the two in succession.

Anger, pride, deceitfulness, and greed are the four Kashayas recognized by Jainism which it recommends should be eschewed. Jainism is characterized by several distinct practices which include vegetarianism, fasting, prayers, meditation, festivals, rituals, pilgrimages, and monasticism.

The Tirthankara who is credited with giving Jainism its present-day form is Mahavira and Jains venerate Tirthankaras as a mark of gratitude for the teachings left by them. The Gommateshwara statue, located at Shravanabelagola in the Indian state of Karnataka, commemorates a much-revered figure among Jains and stands 57 feet tall, making it one of the largest free-standing statues in the world. 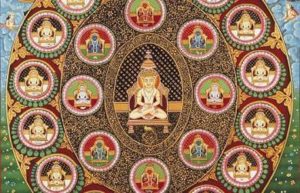 Mahavira was succeeded by a long line of teachers often called Patriarchs and it would seem that their names have been correctly preserved through the accounts of their doings are meager. Various notices in Buddhism literature confirm the idea that the Jains were active in the districts corresponding to Oudh, Tirhut, and Bihar in the period following Mahavira’s death, and we hear of them in Ceylon before our era. Many dedicatory inscriptions prove that the Jains were a flourishing community at Muttra in the reigns of Kanishka, Huvishka and Vasudeva.

Jainism also spread in the South of India and before our era it had a stronghold on Tamil lands. According to a Jain tradition, there was a severe famine in Northern India about 200 years after Mahavira’s death and the patriarch Bhadrabahu led a band of the faithful to the South and it also made considerable progress in the Southern Maratha country under the Chalukya dynasty of Vatapi, in the modern district of Bijapur under the Rashtrakuta sovereigns of the Deccan. 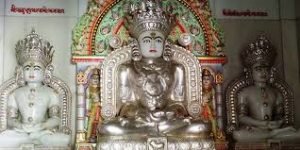 Jains are present across India and Jainism is the sixth largest religion in the country. They are considered to have the highest literacy percentage among all India based religions. More than two-fifths are found in Mumbai, Rajputana and Central India. Elsewhere, they are generally distributed but only in small numbers.

They observe caste and generally belong to the Baniyas which include many wealthy merchants who expend large sums on the construction and maintenance of temples, houses for wandering ascetics and homes for cattle.

Their respect and care for animal life are remarkable. Wherever Jains gain influence, beasts are not slaughtered or sacrificed and old or injured are often kept in hospitals or asylums. Even in shops, lamps are carefully screened to prevent insects from burning themselves.

The principal divisions are the Digambara and Svetambara and an offshoot of the latter called Dhundia who refuse to use images in worship are remarkable even among Jains for their aversion to taking life.

Even more remarkable are the spectacular Jain temples found on several eminences, such as Girnar and Satrunjaya mountain masses which rise abruptly to a height of three or four thousand feet of level plains. On the summit of Satrunjaya are innumerable shrines, arranged in marble courts or along well-paved streets. In each enclosure is a central temple surrounded by others at the sides.

Jain food culture is based on strict non-violence. They are hardcore vegetarians who are much disciplined about their eating habits and are healthy human beings able to sometimes achieve a difficult fasting routine of only boiled water once per day spanning over a period of 30 days.

Animal flesh is a complete ‘NO’ for any Jain. Animal based food products are completely avoided and that throws out a lot of dairy products, cosmetics, etc out of the window for them. They also avoid anything which is available from under the soil like garlic, onions, potatoes, beetroot, etc and the reason for them to not eat the roots is not to harm any organisms which survive under the soil and also plucking the root will ultimately kill the plant. Stale food is also avoided as it tends to have high micro-organisms built up over a period of time.

Jains have a diet heavily leaning on fruits or vegetables which grow on a tree and fall down to be collected and hence do not cause harm to the tree. Cereals or pulses which require the plant to dry off completely before the pulses or cereals are pulled out are also consumed. Spices which only have health benefits like cardamom, cumin seeds, cloves, fenugreek, etc are used in their cooking. 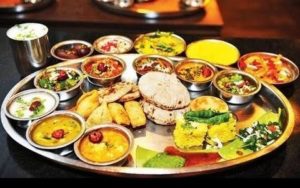 Traveler Food was founded on very strong principles encompassing high-quality, delicious, hygienic and healthy food for train travelers. We provide adequate varieties of Jain food in train from 8am to 10pm in more than 600 railway stations across India following all norms and guidelines set by Indian Railways and FSSAI.