For millennia, people have relied almost totally on spiritual guidance. This has led many temples where Gods are believed to have exceptional powers and many places of worship which are believed to have had divine visitations, to be glorified over the ages. Visiting sacred places is accepted as a desirable practice to earn religious merit (phala) within a life lived according to ‘dharma’ and it is one of the ways towards self-realization and bliss. By visiting various sacred centers according to their needs and requirements, people maintain their wants fulfilled.

Sree Anantha Padmanabha Swamy Temple is a very famous Lord Vishnu temple located in the center of the state capital city Thriuvananthapuram in Kerala state (popularly known as God’s own country). The temple is built in an intricate fusion of the indigenous Kerala style and the Dravidian style architecture featuring high walls and a 16th-century monumental tower (gopuram). The original seat/source (moolasthanam) of this temple is Ananthapuram Temple in Kasargod, Kerala. It is the richest Hindu temple in the world in terms of gold assets and precious stones and by far the wealthiest place of worship of any kind in the recorded history of the world with an estimated $22 billion worth of gold and jewels stored in the underground vaults. In line with the Temple entry proclamation, only those who profess the Hindu faith are allowed to enter the temple and devotees have to strictly follow the dress code. The name of the city of Thiruvananthapuram in Malayalam (local language of Kerala) translates to ‘The city of Lord Anantha’ (Thiru Anantha Puram), referring to the deity of Padmanabhaswamy Temple and this temple stands close to the holy tank – Padma Theertham, which means ‘lotus spring’. This temple is one of the principal ‘Holy Abodes’ (Divya Desams) in Vaishnavism and is glorified in the ‘Divine Management’ (Divya Prabandha).

In 1750, King Marthanda Varma, the noted one among the Travancore kings, did a major renovation to the temple and the present-day structure was made by him. Marthanda Varma had vowed that the royal family will rule the state on behalf of the Lord and that he and his descendants would serve the kingdom as Padmanabha Dasas or the servants of Lord Padmanabha. 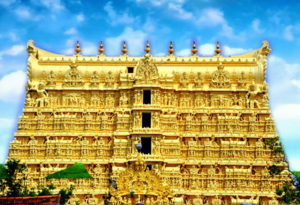 Anantha-Shayana literally means ‘One who is reclining on the serpent Anantha. Lord Vishnu has several aspects of manifestation and the one depicting him as reclining in the coils of serpent Sesha or Anantha (as bed) is called ‘Seshashayana’ or Ananthashayana. The principal deity of Lord Vishnu is enshrined in the Anantha Shayanam posture, the eternal yogic sleep on the serpent Anantha Sesha. Sree Padmanabhaswamy is the tutelary deity of the royal family of Travancore, Kerala and the titular Maharaja of Travancore declare themselves as ‘Sree Padmanabhadasa’, the slave of Lord Padmanabha. 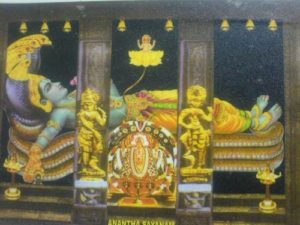 IMPORTANCE OF THE IDOL

Sree Padmanabhaswamy is worshipped through three doors. In the sanctum sanctorum, the Lord reclines on the serpent Anantha Sesha and the serpent has five hoods facing inwards, signifying contemplation.

The idol of the lord here is made up of 12000 saligramams that compose the reclining lord. These special saligramams are from the banks of River Gandaki in Nepal and were bought to the temple with all pomp and gaiety on elephant top. The deity of Padmanabha is covered with ‘Katusarkara Yogam’, a special Ayurvedic mix, which forms a plaster to keep the deity clean. The platforms in front of the vimanam where the deity rests, called ‘Ottakal Mandapam’, are carved out of a single massive stone. Followers believe that the Lord personally came in disguise and had many times saved the Travancore Kingdom from the clutches of enemies.

The temple and its assets belong to Lord Padmanabhaswamy and were for a long time controlled by a trust headed by the Travancore Royal Family. However, for some time the Supreme Court of India had divested the Travancore Royal Family from leading the management of the temple. A private petition seeking transparency in the running of the temple changed the way the world looked at this holy place.

Temple treasure is a collection of valuable objects including gold coins, statues, ornaments, diamonds, and other precious stones that were kept in eight designated vaults. The temple management authorities were aware of the existence of six vaults and subsequently, two more vaults were identified. The discovery of huge treasure in these vaults attracted widespread national and international media attention as it is considered to be the largest collection of items of gold and precious stones in the recorded history of the world.

The Royal Family of Travancore could finally heave a sigh of relief when the top court delivered its verdict on the 13th of July 2020 on a nine-year-long management dispute over the temple upholding their rights in the temple’s administration. The family called this verdict ‘not a victory’ but a blessing from Lord Padmanabha. 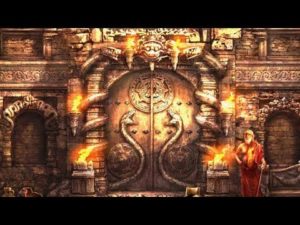 How to visit the temple by train?

Shri Padmanabha Swamy temple, being one of the most famous temples catches the eye of any tourist. You can travel to any of the following stations to visit the temple:

The closest being (TVC)Trivandrum Cntl and (TVP)Trivandrum Pett. These stations have more frequency of trains and are the best stations in Kerala. The trains in these stations connect to major cities of India and are also well-equipped with amenities.

While seeking blessings from Lord Padmanabha, our entire team at Traveler Food congratulates the ‘Humble Custodians’ – The Royal Family of Travancore and wish them all the very best in their future endeavours at the Temple.

Our goal at Traveler Food has always been to enable delivery of the highest quality, healthy and hygienic food in train you love the most and in the safest way possible with a mission to keep serving train travellers delicious meals on train from our top restaurant partners in more than five hundred stations across India. As this is one of the major temple tourist spots you must take a trip and travel by train will make your journey even more memorable.

Don’t worry about your food essentials while travelling as you can enjoy a Jain, Veg or Non-Veg platter by ordering with us online or just a call.