Ludhiana, an eventful city, Situated on the banks of river Satluj through 13kms away from its main course, Ludhiana is a populous city and a major industrial hub of Punjab. Being the heart of Punjab, it is very well connected to almost all major cities of India via railway network and is famous for its hosiery and woollen industry, colourful Punjabi culture, availability of delightful food joints in every street corner filled it with people enjoying the food. 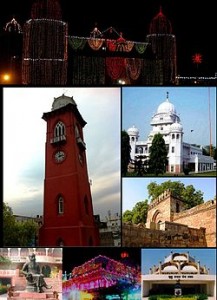 Located in the centre of the city, Ludhiana Junction is the busiest railway station in Punjab. It falls in the Firozpur division of the Northern Railway Network and is a major station on the Delhi-Amritsar Corridor. Ludhiana Junction has 7 platforms, around 200 trains starting and terminating and experiences around 15-25 thousand passengers every day. It has trains to Jalandhar, Delhi, Firozpur, Kanpur, Kolkata, Jammu and every other direction of the country and is in the list of top 100 booking stations of the Indian Railway Network.

Travelling across North-Western or Northern Railways won’t disappoint you in terms of Food on train ever. There’s a lot of variety available to order Food on the train at Ludhiana Railway Station along with some of the famous restaurants nearby the Ludhiana Junction.

From the huge list of restaurants, cafes, coffee shops and dhabas around the Ludhiana Railway Station one can easily make out the variety of food that’ll be there. From authentic North Indian Punjabi food to South-Indian & continental food, anything you wish for you’ll find around the city as well as Ludhiana Junction. Ludhiana along with whole Punjab is famous for its tandoori food and is admired by people across the country. Some of the popular dishes include Murg Makhni with gravy, the combination of Makki ki Roti and Sarso ka Saag, Chhole Kulche, Chur Chur Naan, Kathi Rolls of Chicken, Eggs or Paneer etc. Rice combos with Kadhi or Rajma are another favourite and the best to go foods for your travel. Lassi is an integral part of Ludhiana cuisine and can be seen permanently in every meal ordered and served to anyone. In conclusion, Ludhiana’s food with the use of spiced and desi ghee is known for its traditional Punjabi/Mughal roots and often for leaving people mesmerized.

Food on trains is not the same as it was a decade ago. It has changed a lot along the years. Including the increase in food options, there has been a tremendous increase in food delivery options as well. In itself “food on train” industry is a competitive business now with many outlets and online delivery apps trying to sway customers by providing excellent food delivery services from the famous restaurant nearby Ludhiana Railway station to people in trains during their journey as they pass through Ludhiana Junction.

Most trains usually stop at Ludhiana Junction for around 5-10 minutes so whenever you’re crossing Ludhiana and your stomach craves for delicious food, remember to pre-order it and get your food delivered on the train itself. Log on to our website or download our app called traveler food to place your order now!

5 huge Thalis around India which you can’t e...