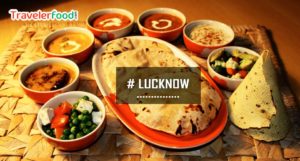 Is anyone else craving the famous Lucknowi Galawati Kebabs or is it just us? Let us tell you the tale of this beautiful city of Lucknow that is located in Uttar Pradesh, which is also known for being the eleventh most populous city in India. Which should not come as a surprise to us because everyone goes where the good food is, and there is no competition of good old Mughlai food that you can find in the city. Well, the reason behind this is quite simple that during the Mughal rule, Lucknow used to be the hub of all the Nawabs, and they do not settle for any less than the delicious mouthwatering kebabs. We at Traveler Food have taken it upon us to make food delivery at Lucknow railway station possible with our brand new website and our app, but we will get into these details later. Let us talk about more food for now.

Lucknow has the weather of any typical North Indian city which basically means that the summers are too hot and the winters too dry and cold. Apart from the food and the weather, the city is also known for being culturally rich in art, music, poetry, embroidery (Lucknowi Kurtas), and finance. To explore the archaeological sights in Lucknow here are some places that one must go to, Jama Masjid (yes, apparently Delhi is not the only city that has one. Shocking, isn’t it?), Bara Imambara, Memorial Museum which is inside the British Residency which again is a major scenic and historically beauty that one must visit when in Lucknow. The entry fee to all these places is very minimal which again adds value to the beauty of them, just how pocket-friendly they are. The last and our personal favorite place is the Rumi Darwaza which is one of the most fantastic monuments in all of India. So, what is so great about its structure is that from one side of the Darwaza you can see two entrances and when you come over to the other side, you can see three. Isn’t that majestic? If you don’t believe us then you should go check it out yourself. You must hire a tour guide too when in Lucknow to let you know of all these teeny tiny insights of the city. And for the ladies that must be wondering about the Lucknowi Kurtas we had mentioned earlier, you can get those at the Hazratganj market which is known as the shopping hub of the city. Lucknow also has a Planetarium which is called the Indira Gandhi Planetarium which has state-of-the-art projection and you will get to see some really cool effects during the screening too. Even though the world is a zoo, you should still visit the Lucknow zoo to explore new breeds of animals and reptiles.
All this exploring must have left you starving, no? So here is something that you should do when you are in Lucknow. You should go to the website that we had mentioned earlier called TravelerFood.com and order some of the tastiest delicacies on Lucknow before even entering Lucknow. How do you ask? Well, it is really simple, you just need to go to the website, enter your PNR number and your seat number and wait for us to deliver your order within one to two hours of you placing an order with us. You can now order food in train at Lucknow railway station by following these simple steps, and food delivery in train at Lucknow railway station will be made possible by our team without you having to move even an inch. So, what are you waiting for? Place an online food order on the train you are traveling in right now!